It’s easy to think that you’re best off sheltering at home when it’s winter. It’s cold outside, outdoor markets and festivals are closed for the season, and here in Canada many tourist locations are closed from Canadian Thanksgiving in October to Victoria Day in May! Of course there are still plenty of fun activities to do in winter, and we found Peterborough and The Kawarthas to be no different. It was the perfect place for us to stop for a couple of days as we headed north to Silent Lake Provincial Park last winter.

Canadian history and culture at the Canadian Canoe Museum

Only around 1.5 hours from Toronto, Peterborough is easy to get to, and we arrived just in time for lunch! We headed to The Planet, a restaurant in downtown Peterborough that includes many vegetarian and vegan options on its menu, so it was perfect for us. After a yummy sandwich, burger and couple of smoothies, we made our way across town to the Canadian Canoe Museum.

With a history of a significant canoe manufacturing industry, Peterborough is a natural home for the museum. We found a wonderful and engaging museum that charts the role that canoes played for early explorers and fur trappers in shaping the Canada that we know today. Thanks to an excellent guided tour around the museum, we heard all the facts, received the lowdown on all the different types of canoes, and tried our hand at carving our own paddle (it’s harder than it looks!).

While we love a leisurely paddle in a canoe on a serene summer lake, for Canada’s early European explorers there was nothing relaxing about the experience. If paddling huge canoes with a load of 5,000 lb (2,200 kg), wasn’t bad enough, try carrying a package weighing 90 lb (40 kg) via a leather strap on your forehead while portaging over dry land. Fortunately, the package we had a go with only weighed a fraction of that! The demand for these brutal sounding journeys was driven by the fur trade, which sadly accounted for approximately 90% of Canada’s beaver population.

With Canada being so huge, we learnt about the great diversity of canoes from across the country. From the dugout canoes made from a single piece of wood that are common to the west coast, the birch bark canoes of central and eastern Canada, and to the Inuit wooden framed, seal skin covered Arctic hunting kayaks, the museum has it all. The canoes of the rich and famous are on show too, including that of the former Canadian Prime Minister Pierre-Elliot Trudeau, as well as a collection on loan from the Royal Family. All three royal canoes in the collection were made in the Peterborough area, and were gifted to mark special occasions, including one for the Queen’s wedding! There’s even a connection to, ahem, Prince Andrew too, who attended the nearby Lakefield College School for a few months in his youth.

The museum is the largest collection of paddled watercraft in the world. Today, with over 600 canoes and kayaks, 500 paddles and 1,000 artefacts there is a lot to store and showcase, and only 20% of the collection is on show! Fortunately, the museum will be relocating to a brand new, larger facility in 2022, and appropriately adjacent to the Trent Canal and the Peterborough Lift Lock.

Skating at the Peterborough Lift Lock

It’s funny that we should mention the Peterborough Lift Lock, because that just so happened to be where we headed to next. Peterborough is located on the Otonabee River, one of the rivers which contributes to the Trent-Severn Waterway, a 386 km (240 miles) long canal that connects Lake Ontario with the Georgian Bay (Lake Huron).

Built in 1904, the lift lock is the highest in the world, lifting boats 19.8 metres (65 ft) between two sections of the canal. Nowadays the lock is a National Historic Site and is still in use, although in the Canadian winter, when it is cold enough for the canal to freeze over, the lock isn’t doing any lifting! Much like the Rideau Canal in Ottawa, but far less busy, a frozen canal means one thing – strap on your skates and get down on the ice!

We visited on a what was a relatively warm winter day, so the ice was not in the best condition. Emma doesn’t like skating at the best of times on a nicely manicured rink, so she walked on the ice as I tentatively skated on its undulating, rough surface, getting a little more nervous as I spotted a couple of Canadians taking a tumble as they sped around. But, the more I skated, the more confident I felt, and it was a nice and unique place to skate too, with the towers of the lift locks looking down on us. Of course, with confidence, complacency can creep in, and just when I thought I had the knack of skating on the canal, seconds later I was laid out flat on my back on my icy nemesis.

Once back on more stable ground, we took a closer look at the lift lock. We ascended up some steps alongside the lock’s towers, which thanks to some ice on the steps, became something of a treacherous yet fun ascent as we held onto the rail for dear life. The view from the top of the lift lock is great, and gives you an appreciation of the height difference between the two sections of the canal. Fortunately, for our descent back down, we found a road that sloped down towards our parked car, which was significantly less icy to traverse than the steps!

That evening, we ate at The Food Forest, a plant-based restaurant where we had a delicious burger, veggie bowl and dessert, before staying the night at the conveniently located Best Western Plus Otonabee Inn on the outskirts of Peterborough.

Beavers and snowshoeing at Kawartha Nordic

The following morning we picked up some lunch for the day ahead from the Tiny Greens Plant Cafe, where you can also build your own terrarium – with a cat at home, and given cats’ propensity for experimenting with gravity by pushing things off surfaces, we stuck to just the food, even if the terrariums looked cute.

We headed north out of Peterborough to Kawartha Nordic, a cross-country skiing centre. On arrival, it turned out that the warmish weather that had affected skating the previous day at the canal, had also left the ski trails in not the best of shapes either, especially for inexperienced skiers like ourselves. Fortunately for us, you can also snowshoe at Kawartha Nordic, with 9 km of snowshoe trails through the forest of the Canadian Shield. 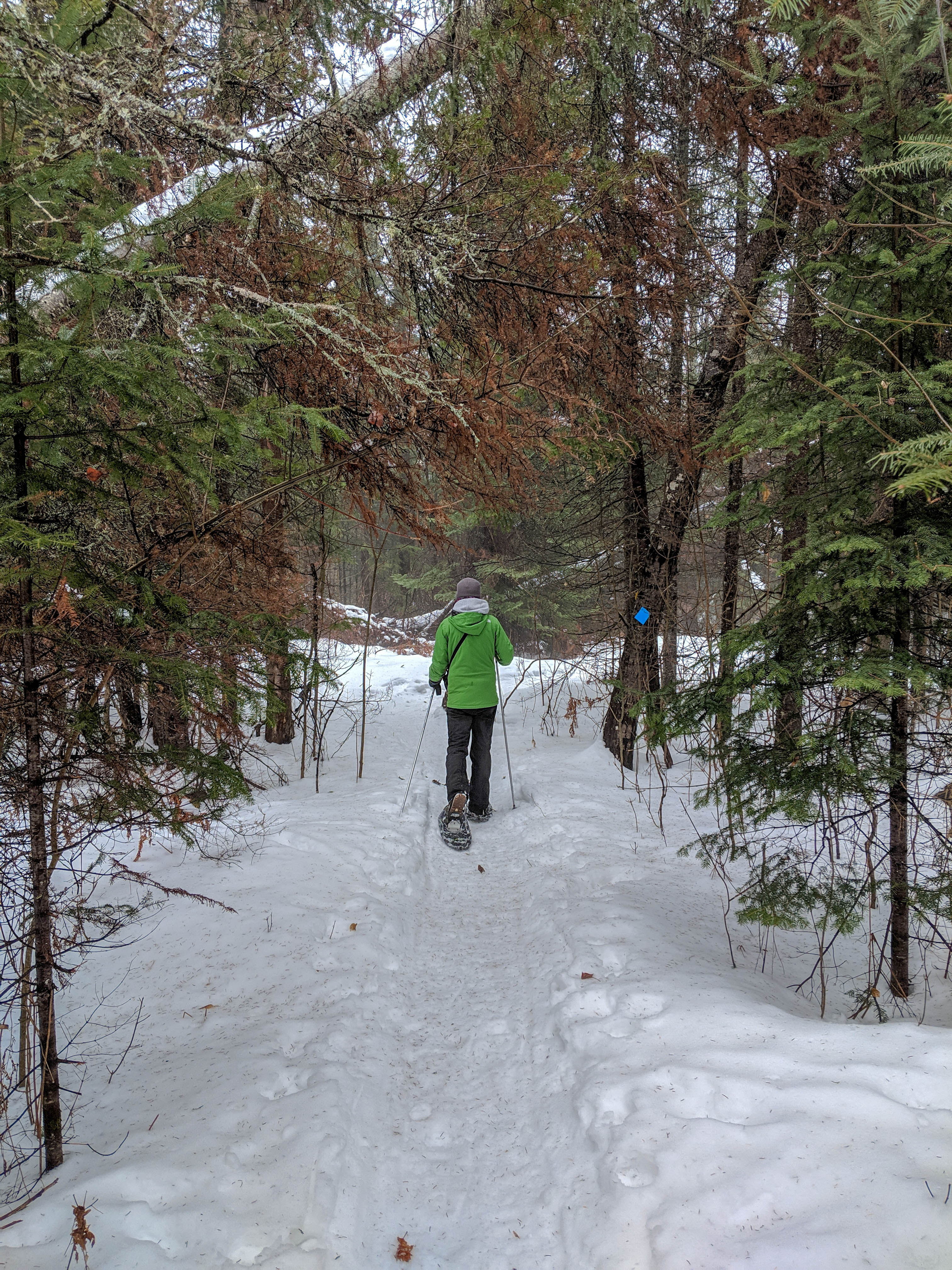 As we picked up our snowshoes from the rental shop, we heard how a beaver had recently been spotted on one of the trails. We happily listened to the instructions of how to find the beaver, more in hope than expectation, given we don’t always have the best record of encountering wildlife despite reports (yes, looking at you moose of Canada). But after trekking through some beautiful snow-covered forest, we came to the point at the edge of a snow-covered lake where the beaver should be, and sure enough, there it was. Having caught a glimpse of us – not difficult when I was wearing a bright green coat – it disappeared off down its tunnel to what was hopefully a warm and cosy lodge among all the snow and ice.

We waited for a couple of minutes, and were rewarded as the beaver re-emerged and got back to work with its haul of gnawed down wood. It was quite special watching in such proximity this iconic animal going about its business, and was a lovely way to end our time in Peterborough and The Kawarthas. 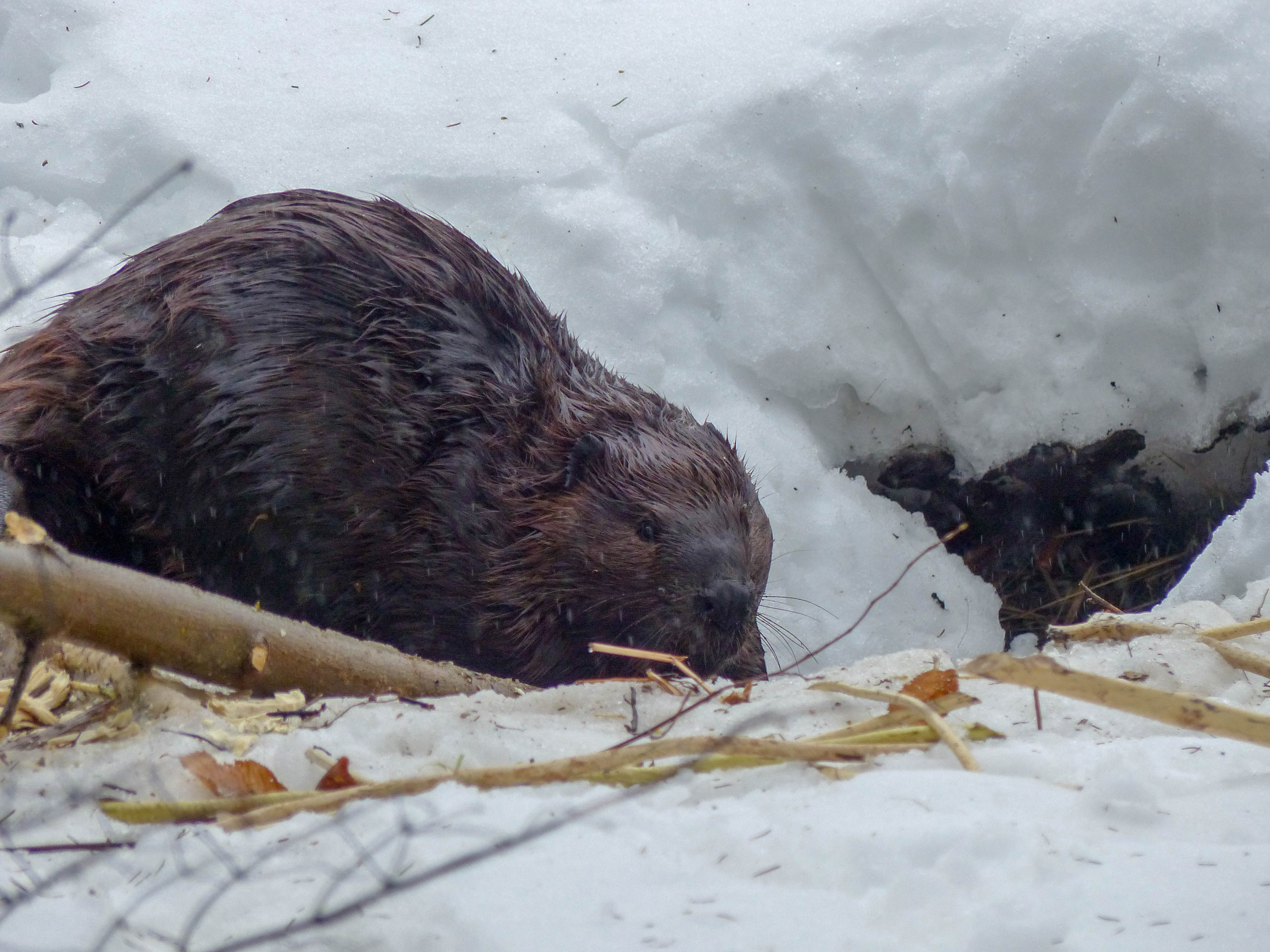 If you are a cross-country skier, then Kawartha Nordic also provides equipment rental and 46 km of classic Nordic skiing trails and 27 km of skate skiing trails, as well as a space to warm up and tuck into a well-deserved lunch.

We look forward to returning to Peterborough and The Kawarthas when its warmer, and perhaps when we can enjoy the canal and lift lock by boat!

Thank you to Peterborough & The Kawarthas Tourism for hosting us in Peterborough and the Kawarthas by providing us with accommodation, meals, Canadian Canoe Museum passes, and entry to and snowshoe rental at Kawartha Nordic.

2 thoughts on “Winter fun in Peterborough and The Kawarthas”