Algonquin Provincial Park is not only huge, but is also blessed by having other provincial parks scattered around its fringes. Armed with a Ontario Parks Annual Vehicle Permit and now with the satisfaction of having seen our first Algonquin moose, we spent the next two days exploring more of what the park has to offer, as well as two of its neighbours.

We’ve canoed twice before in Algonquin, but both times as novices and on the same route. Having had lots of canoe practice since, we decided it was time to venture out into Algonquin on our own in a canoe (and maybe see another moose if we were lucky too!).

We rented a canoe from one of two outfitters that offer canoe rentals in Algonquin – the Portage Store and Canoe Centre. Located on the aptly named Canoe Lake, we headed in the opposite direction to our previous canoe trips, and worked our way through a series of beautiful channels and smaller lakes into Smoke Lake. 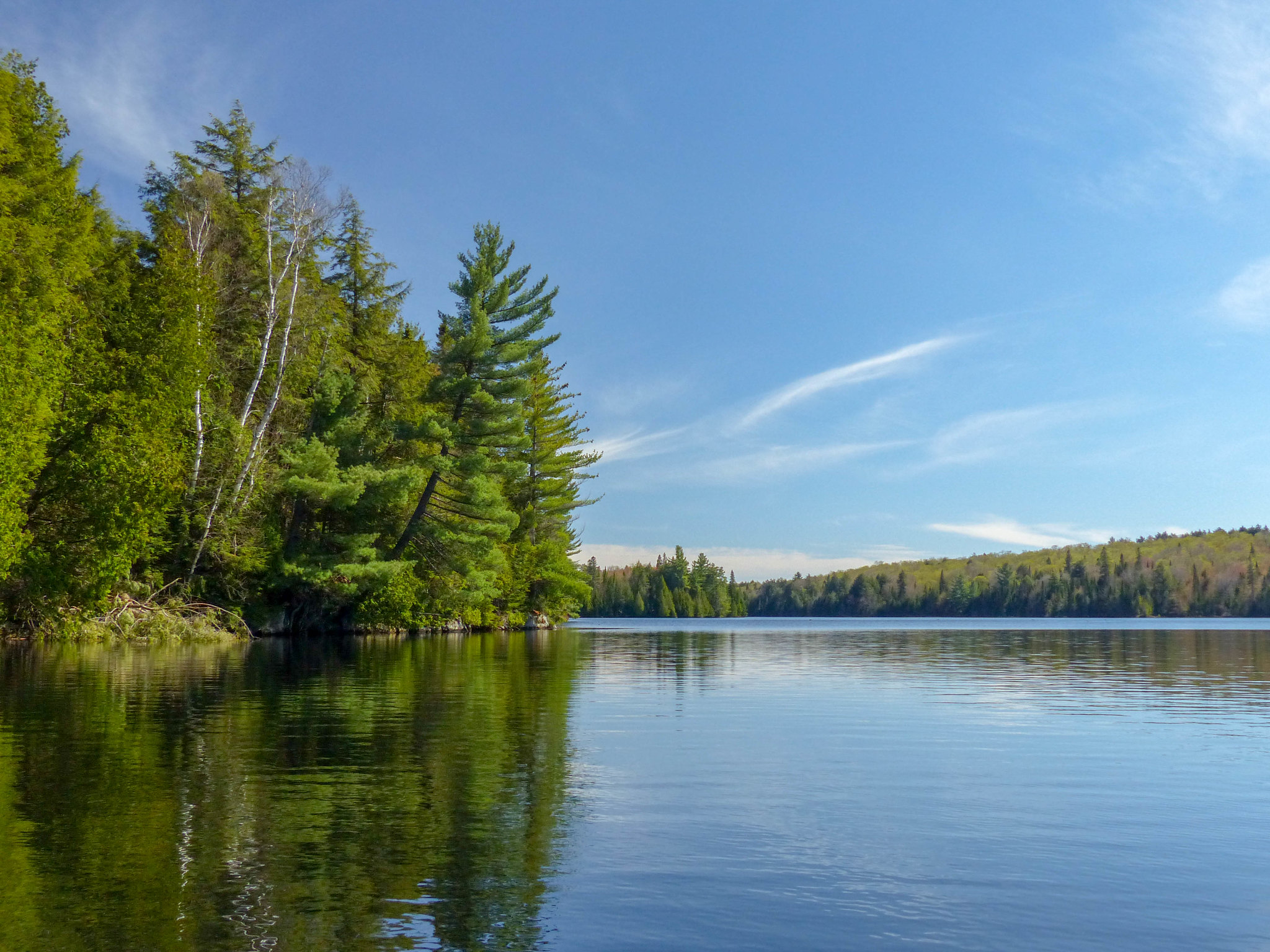 Despite not looking like a long journey on a map, it did take us a long time, but then again, what’s the rush? Part of the reason we visited was to relax and unwind. While the southern end of Canoe Lake can be very busy, we found that the series of channels between it and Smoke Lake were blissfully quiet, and we pretty much had them all to ourselves.

Having explored some of the nooks and crannies of Smoke Lake, we headed back to Canoe Lake under some beautiful blue skies and with a great day of paddling behind us.

On the western edge of Algonquin, not far from the West Gate, is the Oxtongue River – Ragged Falls Provincial Park. It can be easy to miss the park as you travel along Highway 60, but it is definitely worth stopping for.

The park is not big, so it makes for a great addition to a trip by offering something a little different to the serene lakes and moose of Algonquin. From the car park, it is only a short hike until you find yourself overlooking a violent waterfall as the Oxtongue River crashes its way down to the Oxtongue Lake.

From the top of the falls you can watch the river as it starts to speed up and slips over the edge, crashing down on the rocks below. It’s possible to catch a view of the waterfalls from further down as well, or you can wander upstream, where the water is calm, and there’s not much sign of the violent waterfall that lies in wait – other than the wisely portaging canoeists! 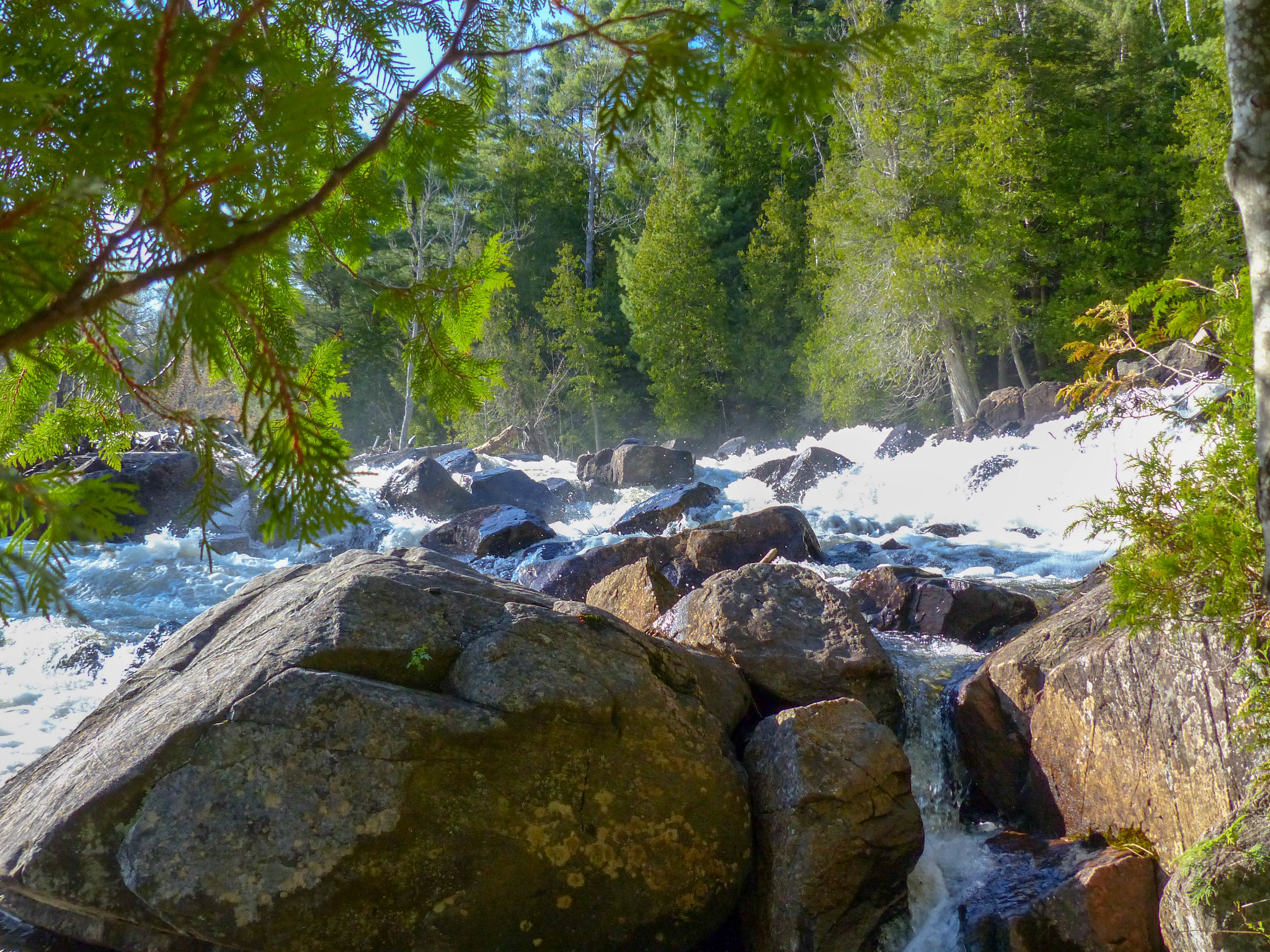 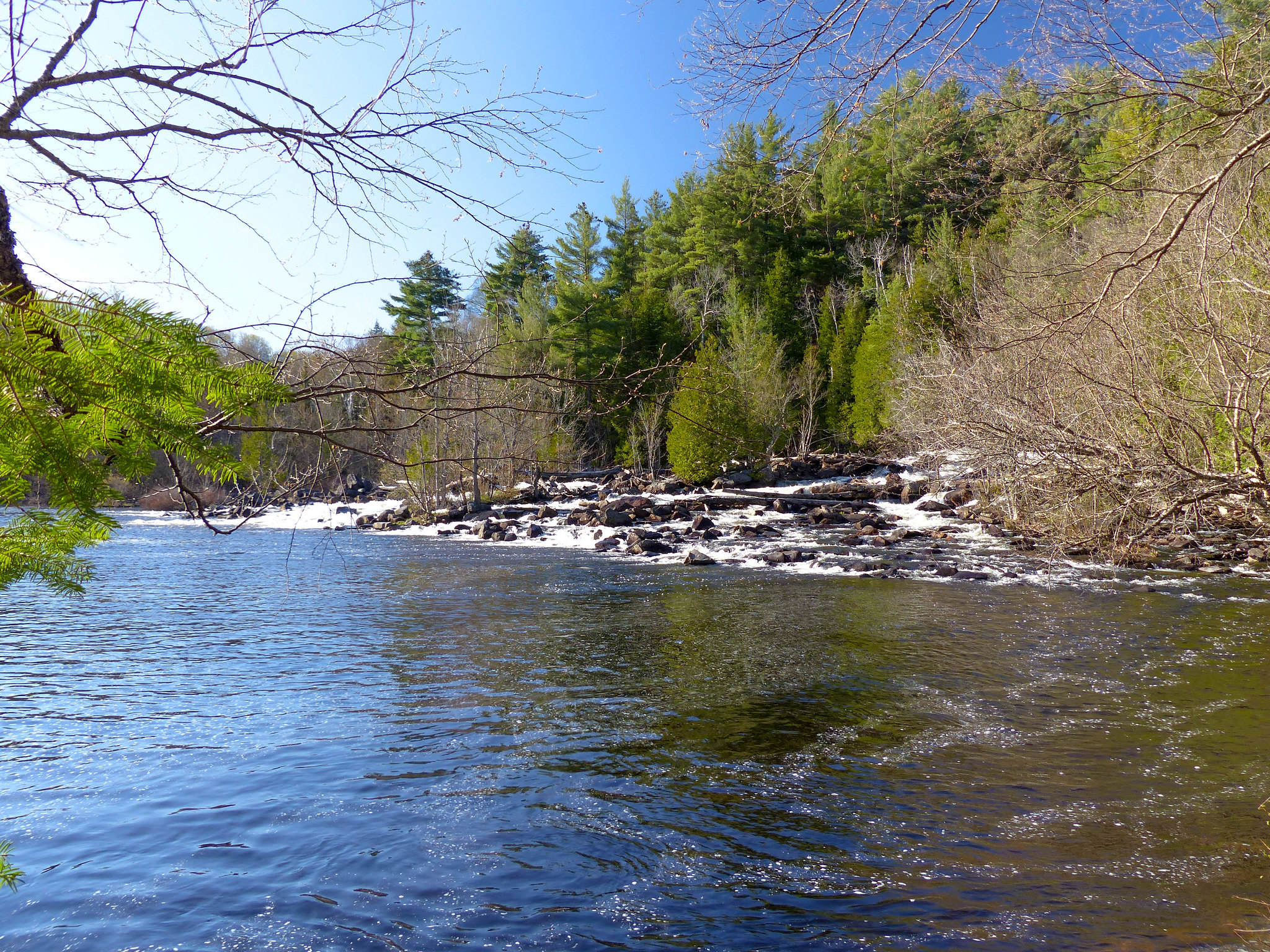 We’ve visited Arrowhead Provincial Park a couple of times before – once with Emma’s parents when the weather was grey and muggy, and a second time when it was winter and we went cross-country skiing and so I fell over lots.

So I felt like we due a visit to Arrowhead when the sun was shining, it was warm, and I didn’t fall over! Fortunately Spring 2018 in Arrowhead didn’t fail us.

The big attraction at Arrowhead is the Big Bend Lookout. From here you get a perfect view of the how the Oxtongue River meanders through the landscape, with the Big Bend surely destined to be cut off into an oxbow lake one day and to be a real life story of what you were always taught in geography class.

There a number of trails in Arrowhead, such as dedicated cycle trails, hikes to waterfalls and a trail which circumnavigates Arrowhead Lake. We started off with the short and easy hike to Stubbs Falls, and followed that with the Mayflower Lake Trail, both of which also doubles up as a snowshoe Trail in the winter. We might not have seen any actual beavers, but we saw plenty of their activity, including evidence of felled trees and a beaver dam.

So there you have it, in two days we were able to visit three Ontario Parks with just one permit. All within a few hours drive of Toronto.

To visit any of these Ontario Parks you must have a permit. These are available to purchase at visitor centres or in the parking lot at Oxtongue River – Ragged Falls Provincial Park.

Seasonal Day Use Vehicle Permits are also available and will save you money if you’re a frequent visitor to Ontario Parks.

Both daily and seasonal permits give you access to all three parks.

Thanks to Ontario Parks for providing us with a pass.