It’s that time of year again – summer is here and so too is camping season. Camping and outdoor activities in summer’s sunshine and warmth lie ahead. We look back on our camping trip to Grundy Lake Provincial Park and the neighbouring French River from last summer, two beautiful parks located three hours north of Toronto.

Our trip had started off well. Normally Highway 400 heading north out of Toronto on Friday is hellish, but we’ve got our routine down to such a tee now that we managed to avoid the worst of the peak traffic. Things were going so well, that quite unbelievably we had our tent and campsite all set up before the sun went down – it hasn’t been unknown for us to erect our tent in the headlights of a car before!

Retiring to our tent for the night with our smug faces on, they were soon wiped clean off our faces in the middle of the night. Rain was pelting down on our tent like we had set it up at the base of a waterfall, lightning constantly lit up the tent like there was a fireworks display next door, and the thunder boomed directly overhead. It was so bad that even me, the deepest of the deep sleepers, woke up at 2am.

It quickly became clear that we weren’t going to be getting back to sleep any time soon, and our minds wandered to whether we should still be in a flimsy tent, in a forest, in a thunderstorm and with lots of water around. A quick Google search resulted in the Canadian government’s website telling us to get the hell out of the tent and to the closest building. So we legged it to the car and drove to the comfort station, passing a branch that had come down near the entrance to our campsite and later a large tree that had been shredded by the storm. At this point we knew that we’d made the right decision.

We waited at the comfort station in the car until 3am – surprisingly joined by only one other couple – before nervously returning to our tent once the storm had subsided. Fortunately it hadn’t been crushed by a tree and had remained impressively dry despite the deluge.

We woke up the next day, a bit bleary-eyed – probably like everyone else in the park – from the middle-of-the-night wake up call. Checking our phones to see the time, we both read an emergency alert warning us of potential tornadoes in the area that day!

We quickly decided to cancel our canoeing plans for the day, not fancying fighting off a tornado in the middle of the lake. So instead we headed out of Grundy Lake, passing other campsites who had tents hanging from trees to dry – smug faces re-engaged – before heading north to French River Provincial Park.

The French River is so named because of the early French explorers who used the river as they travelled in the region. It’s a large park, a lot of which can be accessed by backcountry paddling and wilderness campsites. If paddling through the Ontario wilderness isn’t your thing, then you can still get a taste of the park via its excellent visitor centre just off the Trans-Canada Highway.

We took a look at the ‘Voices of the River’ exhibit before heading outside to the suspension bridge that crosses the French River where we hoped to get some good views. At 512ft long, it is the world’s largest snowmobile bridge (although how many competitors does it have?) and can carry the weight of over 100 snowmobiles at a time. 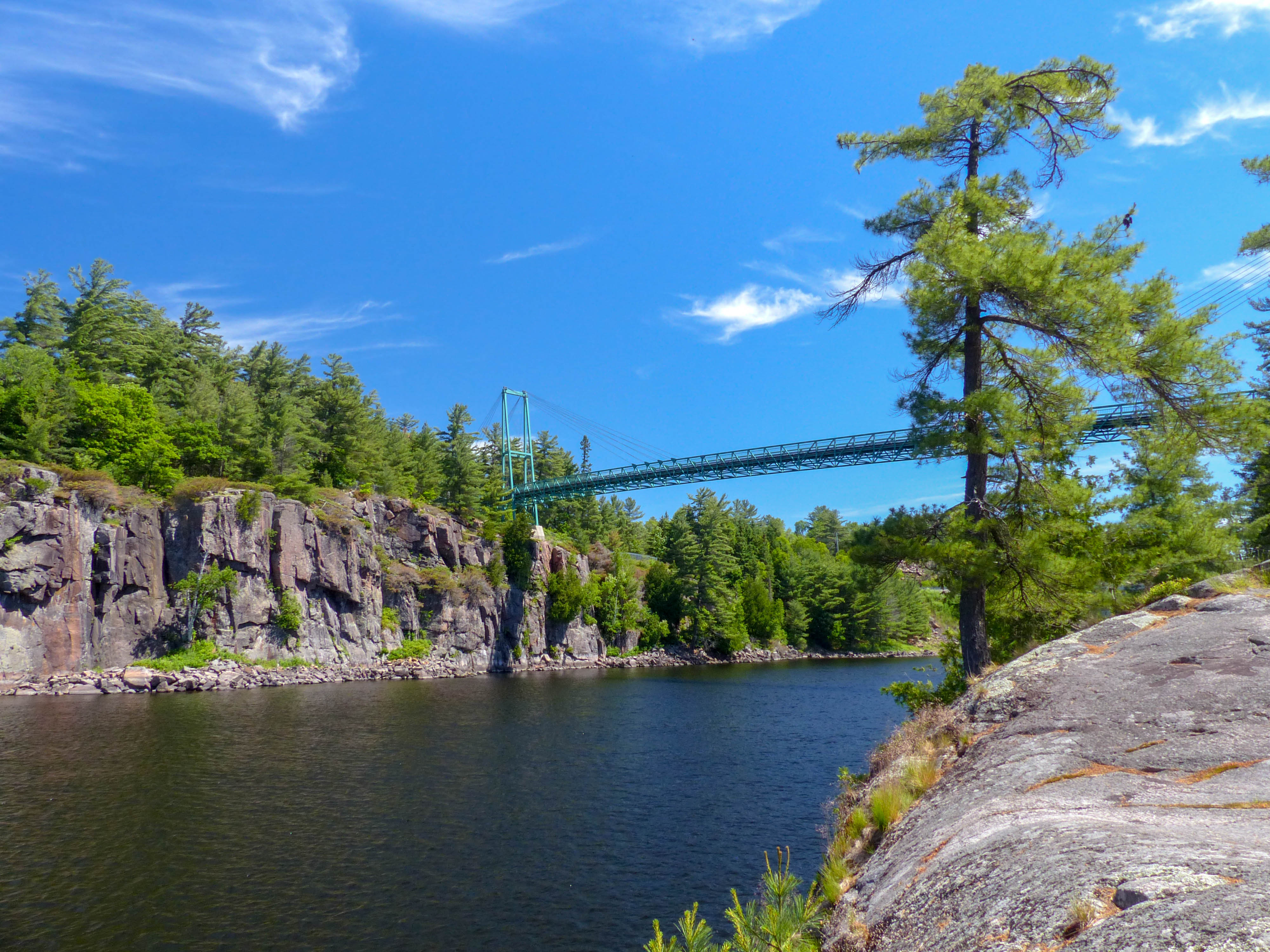 Sadly the suspension bridge was closed off when we visited, so we carried onto the 4km-long Recollet Falls Trail, which follows along the southern bank of the French River. The portage route around the falls has been used for generations, including by First Nations and those French explorers.

The trail is easy, although as you close in on the falls you have to step down some exposed rocks. Still wet from the storm the night before, Emma lost her footing, before slamming down on the rock and then proceeding to slide down the rocks and taking me out in the process like a bowling balll! At least on a positive note, we didn’t encounter any super-annoying bugs that devotedly followed us through the woods trying to bite us. Not one single bug.

With the threat of thunderstorms and tornadoes gone, the following day we finally made it out onto the water at Grundy Lake, setting off in our canoe from a beach close to our campsite. We paddled down Grundy Lake itself, before passing through the narrow Nisbet Creek that was teeming with wildlife. Now in Gut Lake we paddled around its perimeter, stopping off to eat our lunch on some warm rocks on the shore. From Gut Lake, there is a 190 metre portage to the neighbouring Gurd Lake. 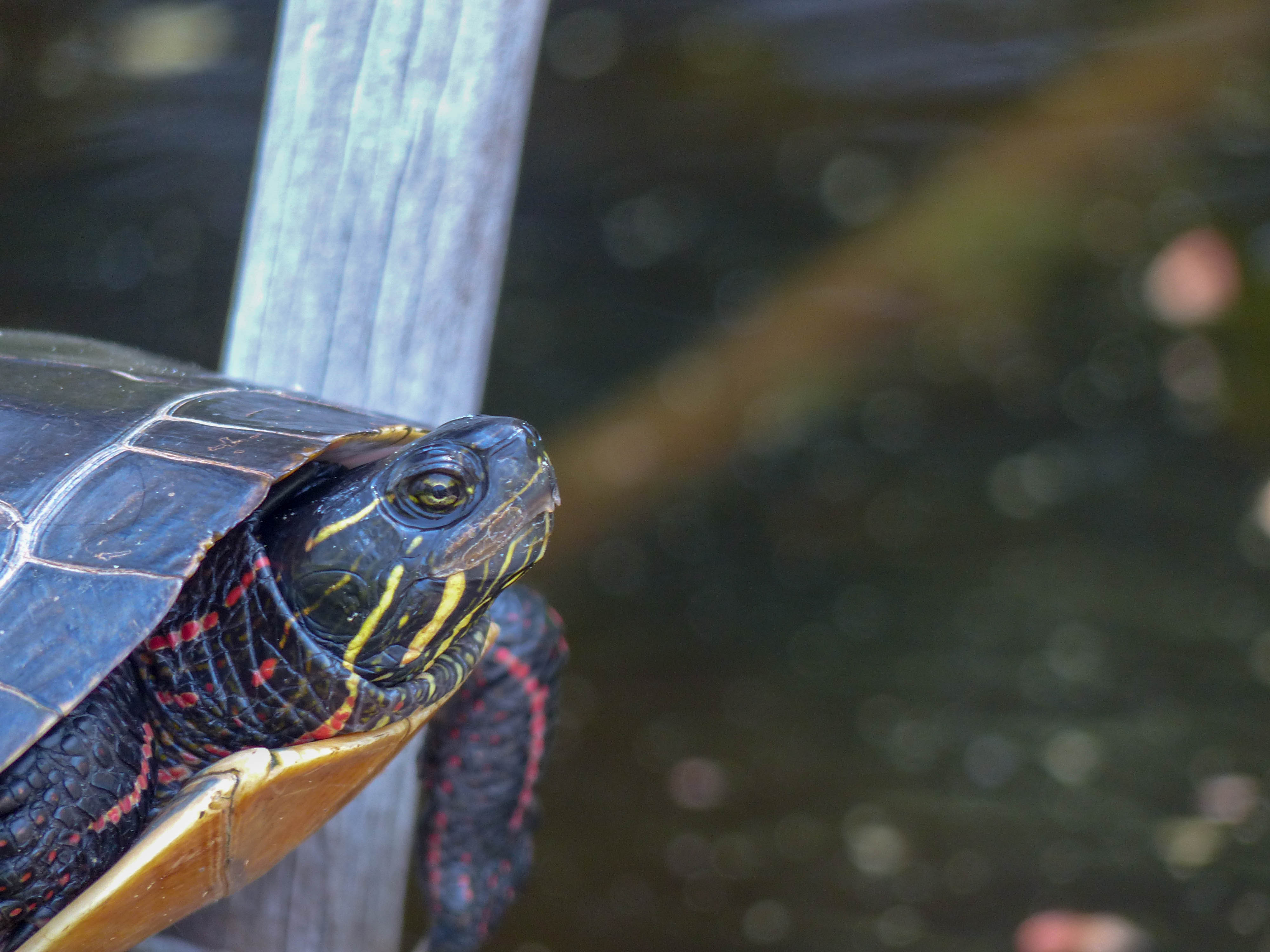 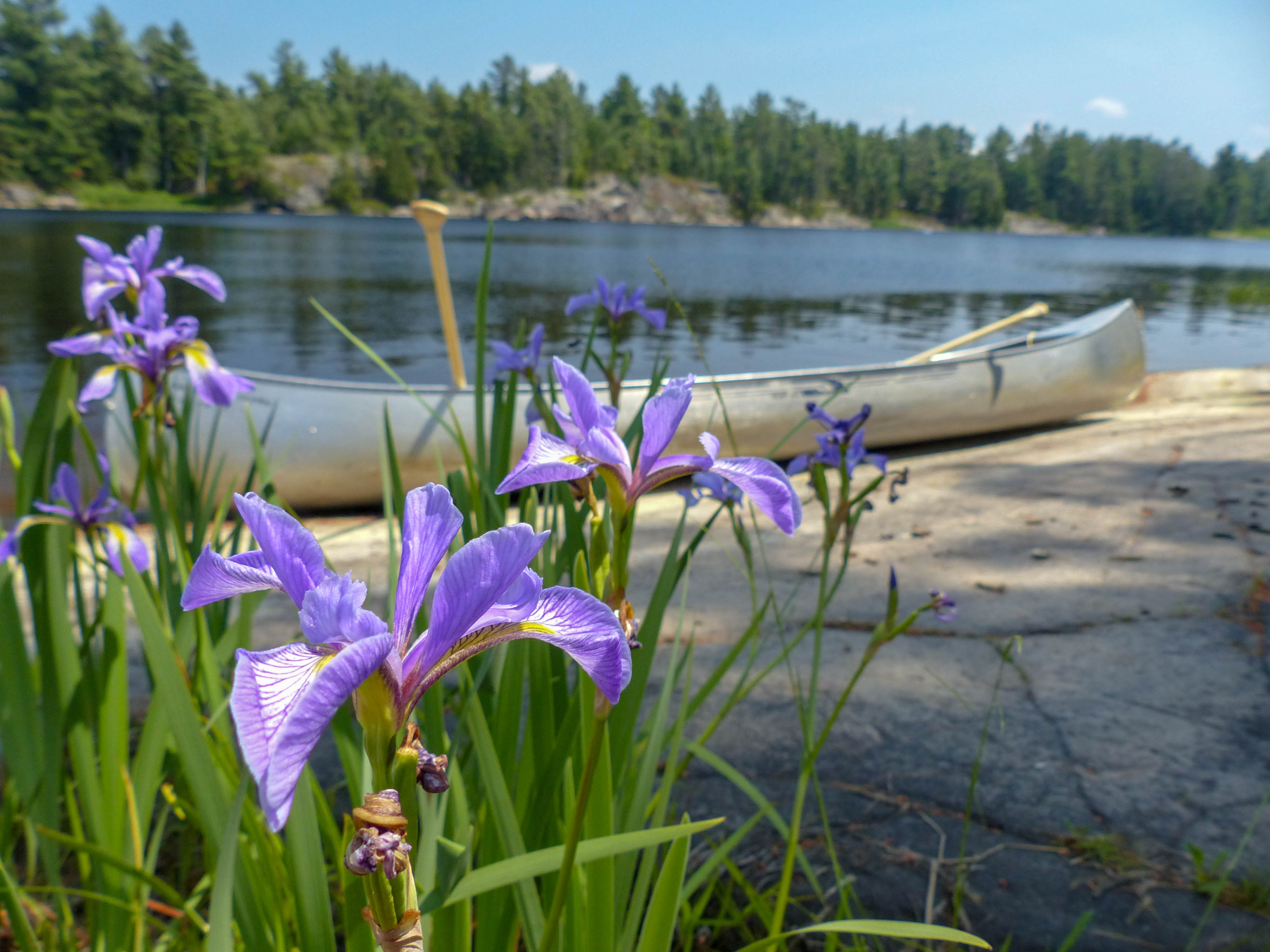 Not fancying carrying a heavy aluminium rental canoe through the forest for almost 200 metres, we instead headed back through Nisbet Creek and explored more of Grundy Lake. With most people concentrated at the beaches, those with canoes can find their own private spot along the shoreline.

We did just that, bringing our canoe ashore before jumping in the lake for a swim. Although getting in the lake was anything but easy. Just under the water level a treacherous layer of extremely slippery, slimy algae coats the rocks, requiring a delicately executed slide to get in the water. Unfortunately for Emma, it all went wrong as the slimy algae claimed her as a victim and she endured her second fall of the trip. At least she didn’t take me out this time!

Beyond canoeing, there are also three hiking trails at Grundy Lake, while fishing for a variety of species is permitted too. Or, you can just hang out on the beach, which is what we did, enjoying a beautiful summer’s sunset across the water.

Canoes and equipment can be rented from the Grundy Lake Supply Post, located opposite the park entrance. They’ll deliver your canoe to your campsite, or, if you ask nicely, close to a beach/launch point before then picking it up again.